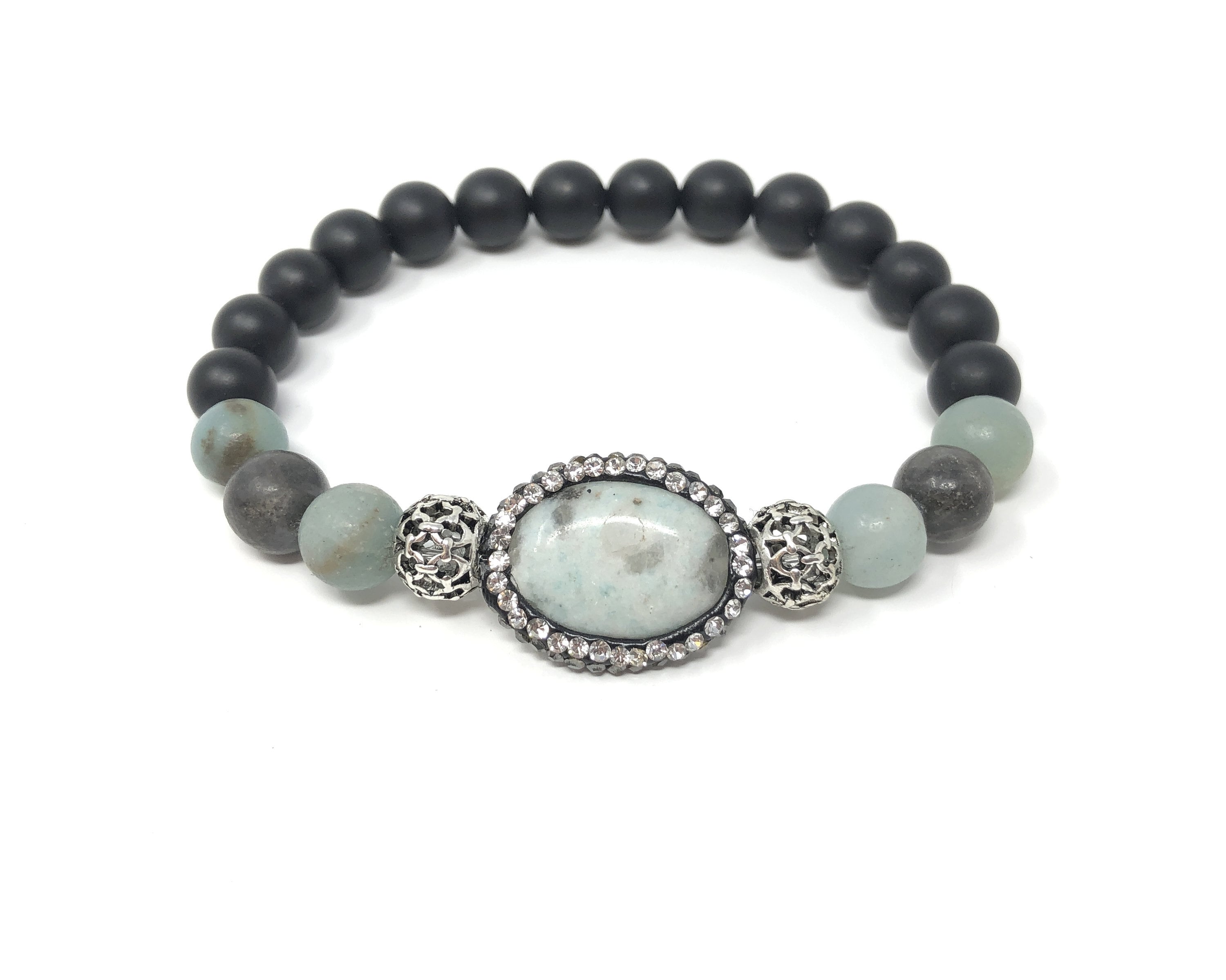 ONYX - PROPERTIES
In ancient times it was considered the misfortune stone, it generated sadness, fears and hallucinations. It was also believed that he had a demon kept inside and that at night he went out to sow discord. The name is derived from the Greek word meaning nail. The story is that one day Cupid cut Venus' divine nails with an arrow while she slept, he left the cutouts scattered on the sand, and fate turned them into stone so that no part of the divine body would ever die.
Black onyx is said to promote vigor, strength and perseverance, helps to learn lessons by imparting self-confidence and helping you to be in harmony with your environment, it is a protective stone, due to the way it repels and diverts negative energy. they are often used in meditation, to help people find a deeper spiritual connection and achieve balance.
Chakras: Sacral.

AMAZONITE - PROPERTIES
It was named "stone of the Amazon" by the comparison with a nephrite, in ancient times the Indians believed that it came from the Negro River in the country of women without men. However, it is doubtful that green feldspars can be found in the Amazon area.
It is said that the amazonite absorbs the emanations of the electromagnetic haze, stimulates self-determination incites to take the reins of our own life. It presumably eliminates grief and anxiety having a relaxing and calming effect.
Chakras: Heart, throat, frown.

JASPER KIWI - PROPERTIES
In the Middle Ages it was considered the stone of the victors, who embedded in their swords, as was the case of Siegfried who wore a jasper on the hilt of Balmung. American Indians used Jasper in ceremonies to attract rain and for divination. An ancient Egyptian king, Nechepsus, used, to strengthen his digestive system.
Jasper is the supreme protection stone. It helps to endure difficult and stressful times, providing a form of tranquility and integrity. Its ability to balance ying and yang protects and absorbs negative energies thanks to its electromagnetic force. Used in healing, kiwi jasper unifies aspects of life by aligning the chakras. It should be used for people with addictions or compulsive behaviors, as it elevates the mind by helping you see the pros and cons of each situation. Also called sesame jasper.